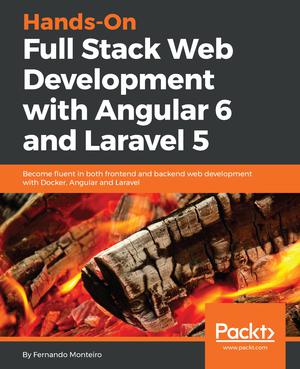 Angular, considered as one of the most popular and powerful frontend frameworks, has undergone a major overhaul to embrace emerging web technologies so that developers can build cutting-edge web applications.

This book gives you practical knowledge of building modern full-stack web apps from scratch using Angular with a Laravel Restful back end.

The book begins with a thorough introduction to Laravel and Angular and its core concepts like custom errors messages, components, routers, and Angular-cli, with each concept being explained first, and then put into practice in the case-study project.

With the basics covered, you will learn how sophisticated UI features can be added using NgBootstrao and a component-based architecture. You will learn to extend and customize variables from Bootstrap CSS framework.

By the end of this book, you'll gain a solid understanding of Angular 6 and how it interacts with a Laravel 5.x backend

What you will learn

Who this book is for

This book targets developers who are new to Angular, Laravel, or both, and are seeking a practical, best-practice approach to development with these technologies. They must have some knowledge of HTML, CSS and JavaScript. Familiarity of PHP is assumed to get the most from this book.